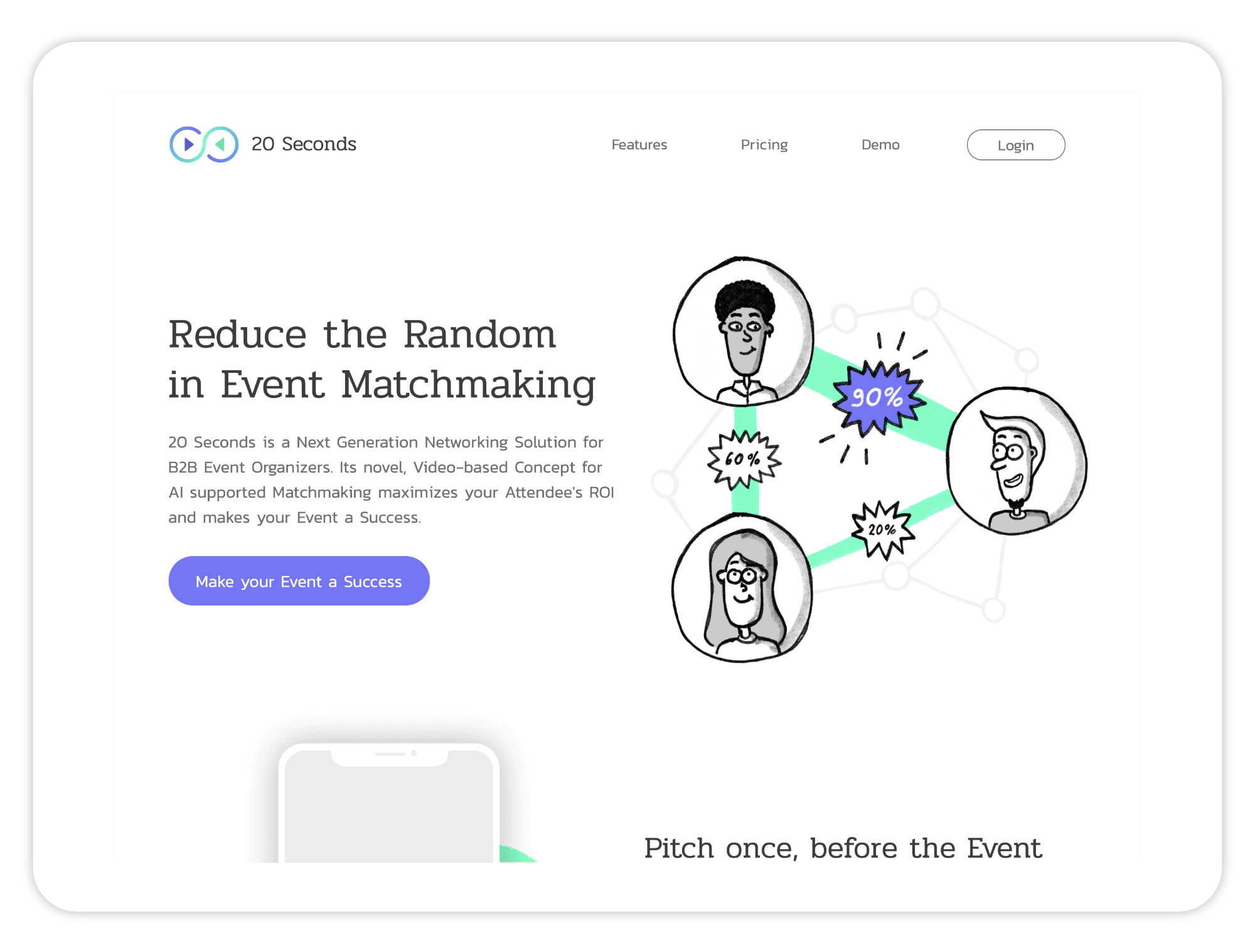 I started this posting a couple of times. Once in mid February while waiting for boarding, still unaware of how bad the crisis would become soon. Once again from the sofa in my living room, with a ban on public gatherings in place and thousands of deaths in Europe. Every time, the news became only worse. Sars-CoV-2 kept tightening its noose around the world.

One of the many consequences of the spread was that one trade fair after another got postponed or cancelled. MWC, GDC, ITB, FIBO,… expodatabase.de currently lists 1306 cancelled or postponed fairs and exhibitions worldwide (24/03/20).

Why am I writing this here? Well, coincidentally a new business idea happens to be in the trade fair space.

But let’s go back in time a couple of years first – 13 years, specifically.

Inception of an Idea

I always thought that a profile video would make things so much easier. 7 seconds was probably too short, minutes were still too expensive, but 20 seconds felt just right.

So I thought that one day, I would build a video dating app and call it 20 Seconds. (In fact, I did, but I’ll save that for another post.)

Next to the online dating gamble, marrying my jackpot, and starting a family with two wonderful kids, I kept pursuing my professional career as a software engineer and entrepreneur. Naturally, this included visiting trade fairs, both as a visitor and as an exhibitor.

Turns out: trade fairs are a lot like online dating, particularly those which are B2B exclusively, or have a significant B2B part. There’s supply and demand of different services and skills, and identifying the right persons to meet at the show is quite a gamble, too. For a long time, that was mostly a matter of having lots of conversations on the fairgrounds, exchanging business cards, and having a drink or two at the afterparty. But just like online dating, the trade fair landscape has changed for the better.

Nowadays, the larger shows come with supporting apps which at least allow browsing through the attendee’s list, maintaining a profile, exchanging messages and setting up a meeting. It still requires a lot of upfront investment to go through the profiles and filter the interesting ones out, and it quickly becomes a nightmare if the event has thousands of attendees, or the attendee list details are incomplete. I found myself repeatedly spending late nights going back and forth between event apps and LinkedIn, only to figure out what attendees actually do and whether they’re a potential match for my business.

Some event apps offer automated suggestions of possible matches, based on categorization of what you offer and what you seek. The whole process is still quite rigid, though. You’re bound to the categories the organizers have defined, and there’s little room for personalization. Profile content which typically is personalized, like a description, isn’t considered because it’s not consistently filled and also much harder to process.

But even when I found some promising matches and had some appointments set up for the show, I found myself repeating my pitch over and over. I am, I offer, I search for,… what about you?

Imagine you wouldn’t have to search anymore. Imagine you would receive proposals for meaningful connections automatically. Imagine you could increase the success rate compared to your own research, with much less time invested. Imagine your contact would appear familiar right away when meeting live, because you remember their voice and body language from their video. All that for a simple recording of your own pitch. A pitch that you would repeat dozens of times on the fairgrounds otherwise.

Imagine you could reduce the random in event matchmaking. (#2)

That’s what 20 Seconds offers. For attendees, 20 Seconds is a mobile app which allows to record and upload a video pitch, to manually browse through other attendee’s videos, and to automatically receive possible matches which are generated through intelligent background processing and matching of videos. For event organizers, it’s a web app which allows them to manage their events and get to know their attendees and why they’re coming to the event. For sponsors, exhibitors and VIPs, it’s a platform to generate more exposure, since they natively advertise seamlessly blend into the other attendees. (And for the sake of completeness, there’s a mix of artificial intelligence and mechanical turk as a backend and another web app for system administration.)

For all participants, it’s a utility for the most efficient and personal B2B event matchmaking.

With 20 Seconds, I am scratching my own itch, but it’s also built around a couple of hypotheses that need validation.

Do you think no one’s willing to record a video and show the other trade fair attendees what they have to offer? Well, here’s my first hypothesis. I anticipate that everyone is willing to invest some time into recording a pitch if there’s a clear benefit in doing so. With 20 Seconds, that benefit is a fully automated matchmaking which doesn’t put attendees into boxes categories, but still keeps a human factor: you can clearly state what you’re offering, what you’re searching for, why you’re attending the show, in your own words; you can see who you’re going to meet; you can hear what they’re offering or searching; you can feel if there’s a connection. It’s a lot like online dating, remember?

If you think that taking a simple video is too much work, then think of how much time you can spend with going through attendee lists and doing research on them.

If you think watching videos of suggested matches takes too much time, observe your fellow passengers on your daily commute. If there’s time for Instagram stories, there’s time for 20 Seconds! You don’t even have to watch other people’s pitches, you can just listen to what other attendees bring to the show and take a look if you hear something interesting.

On top of that, here’s my second hypothesis. I believe that businesses have an even higher interest in getting their word out there. Being a business owner myself, I would definitely like to see my employees presenting my products, services or needs, and generating some exposure and successful connections before the show.

People not willing to present themselves in a short video probably aren’t the right people to attend a trade fair anyway, are they?

Matchmaking is the holy grail of B2B trade fairs. It’s an incredible time saver, and it’s a crucial factor for the success of a show. The more efficient the matchmaking works, the happier attendees and exhibitors are and the more likely they’ll return next time.

And this brings me to my third hypothesis. Event organizers have a huge interest in offering the best return on investment for their attendees and exhibitors, and effective matchmaking is one of the key enablers, so they’re willing to invest into a good solution.

I’ll shed some more light on the different aspects of the product in future posts, but for now, let’s move on to the obligatory status update.

It took me ages to write this posting, and I don’t even manage to write one-line status updates on Twitter… but despite the silence, a lot has happened, and it would require another 1000 words or more to wrap it up. So here’s the short version:

✅ Deploy the Landing Page
It’s not even 50% done content-wise (I find writing copy incredibly hard, even more so as English isn’t my first language), but I’ve decided to put it out into the open to see if someone has useful feedback to offer, and probably to start building an email list. It also puts me under a little more pressure to finish it. Go and have a look: https://20seconds.tv

✅ Create a public Trello board
I started working with a Trello board without announcing it first, but it’s now available for all to see at https://roadtomrr.com/my-public-trello-board/

Everything will be fine

I’ve started this posting on a quite negative note. There’s no way denying that the world is in crisis, and will probably be for many more months to come. Organizers of large trade fairs with tens of thousands of attendees need perseverance (and a good insurance) to sustain these troubling times. But one day, trade fairs will open their doors again, attendees will want to meet efficiently, and this story is going to end on a positive note!

#1, #2: I stole both quotes (“Matchmaking isn’t really solved” and “Reduce the random”) from Mykyta Fastovets, who appeared on The Exhibitionists podcast. I’ve another blog posting on that in the pipeline which I am going to publish soon.