Spread the word, Niko has released Irrlicht 0.8. I hope that I’ll have time to have a look this weekend.

MTBF is “Mean Time Between Failures”, and a recent article will lead to a slight increase of the C64’s MTBF. It states that on old C64 was responsible for the electronic displays on the main station of Dortmund, and it lately quit its service after 20 years. The funny thing is that they need to repair it, as a new system would cost three million Euros. An expert from Munich was commissioned to repair the computer, but he did not arrive yet. Rumour has it noone in Dortmund knows on which rail he’ll arrive.

We held a little gamedev contest between christmas and sylvester, and I handed an entry in, too. The goal was to create a little game using graphics from Reiners Tilesets only. 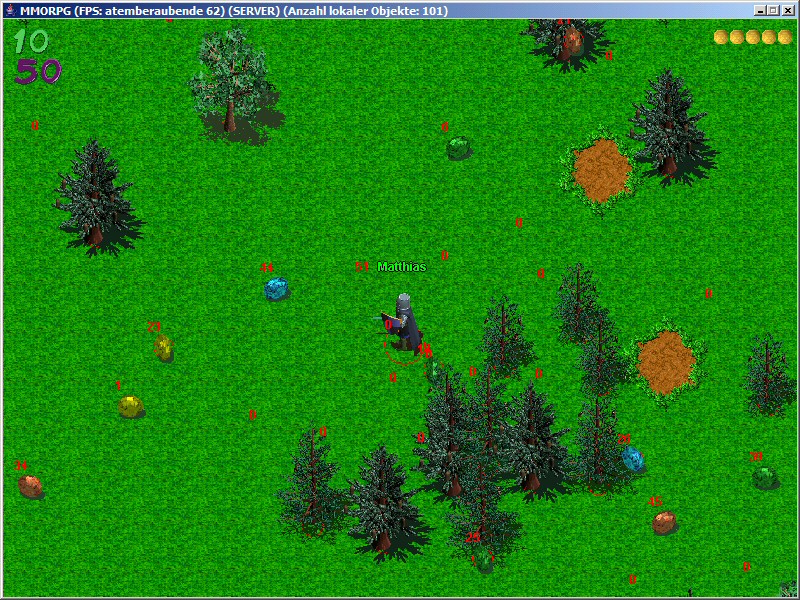 This is a screenshot of my entry. The programming language was unspecified, and so I decided to write a little MMORPG (Minimal Online Roleplaying Game) in Java. I had no time to test it in the Internet and found out that it’s nearly unplayable online, later, but it’s quite nice for LAN playing. The goal is to collect all gems on a map in a limited time, and to beat all collected gems out of your opponents with your sword. The entry and the other contributions, all with full source code, are available for download on the #gamedev.ger contest page.

Sidenote: I recognized that there seems to be a difference in the behaviour of the KeyboardActionListener under Windows and Linux, but I won’t investigate this issue further. If you have strange effects while trying to walk around with your character, you most likely just experience this bug.